The brief and initial requirements

Following a survey by NGM, the tennis courts were located on the roof space housed in a permanent polythene bubble structure. The existing LUX levels were found to be of a poor quality and did not meet any LTA class levels on lux or uniformity.  This needed to be brought up to professional LTA standard and where better to start than the flagship club.

We produced a depth lighting design report with 3D images of the expected installation and how it would look along with projected energy reports and long-term savings.  Bespoke brackets were produced by our metalwork department and a new  LED lighting system with a 7-year warranty was installed. The project required coordination of specialist trades working closely to strict safety guidelines with David Lloyd to ensure the work was completed timely and to the highest standard with minimal disruption to the club and its members.

The courts were only out of use for 1 week so this provided the club and the members the fastest turnaround possible. The new light levels of LTA class one was achieved and fantastic feedback has been received from the club, members and tennis professionals using the facility.  We custom designed the lamp columns to work practically with the dome’s design whilst ensuring longevity and strong health and safety compliance.

It made the lighting options better for the club members but also provided the club with a good return on this investment saving David Lloyd money on their energy cost whilst also reducing their carbon footprint. This lighting system was subsequently rolled out across David Lloyd clubs throughout the UK and Europe in response to its success.  The system pays for itself in 5 years. 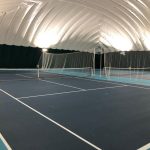 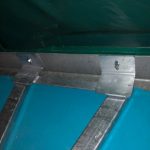 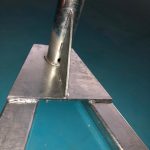 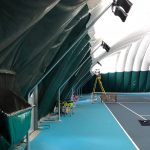 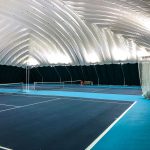 Send us a message and we’ll get back in touch